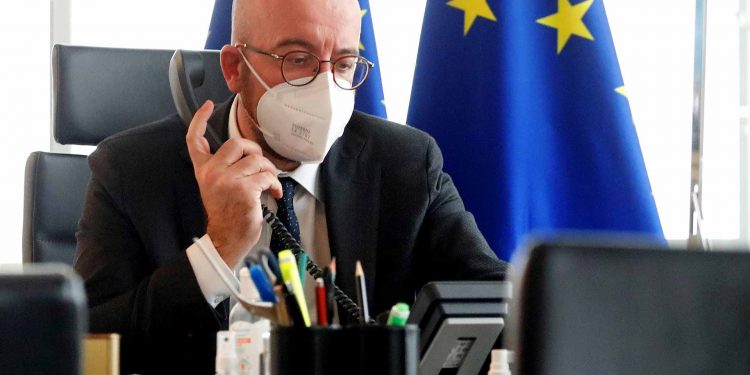 The Presidents discussed relations between the EU and Russia.

President Michel expressed the view that EU-Russia ties are at a low point and confirmed the EU’s approach of the five guiding principles, based on the EU’s core values.

There is currently disagreement in many areas.

From the EU perspective, the relationship with Russia can only take a different direction if there is sustained progress on issues like the implementation of the Minsk agreements, stopping hybrid and cyber-attacks on Member States and respect for human rights. In this context Alexey Navalny’s case was raised. Charles Michel reiterated the EU’s call on the Russian authorities to release Mr Navalny and proceed with a transparent investigation into the assassination attempt on him.

The leaders also exchanged views on the Covid pandemic, on vaccines and on regional and global issues.

eudebates with Vladimir Putin and agree to disagree

Disagreements include the situation in Ukraine, human rights, hybrid and cyber-attacks on EU countries and the assassination attempt on and jailing of Kremlin critic Alexei Navalny. The Council has decided to prolong the restrictive measures currently targeting specific sectors of the Russian economy until 31 July 2021. These sanctions were imposed in 2014 in response to Russia’s actions destabilising the situation in Ukraine.

The Council decision follows the latest assessment of the state of implementation of the Minsk agreements – initially foreseen to take place by 31 December 2015 – at the European Council of 10-11 December 2020. Given that the Minsk agreements are not fully implemented by Russia, EU leaders unanimously took the political decision to roll-over the economic sanctions against Russia.

The sanctions limit access to EU primary and secondary capital markets for certain Russian banks and companies and prohibit forms of financial assistance and brokering towards Russian financial institutions. The measures also prohibit the direct or indirect import, export or transfer of all defence-related materiel and establish a ban for dual-use goods for military use or military-end users in Russia. The sanctions further curtail Russian access to certain sensitive technologies that can be used in the Russian energy sector, for instance in oil production and exploration.

In addition to economic sanctions, the EU has in place different types of measures in response to Russia’s illegal annexation of Crimea and the city of Sevastopol and the deliberate destabilisation of Ukraine. These include: diplomatic measures, individual restrictive measures (asset freezes and travel restrictions) and specific restrictions on economic relations with Crimea and Sevastopol.